The new building will create 54 micro apartments in a good location with optimal connections in Hamburg.

With a GFA of 1,820 m², the property on Barmbeker Markt offers space for approx. 54 serviced apartments.
Our planning envisages fully furnished 1-room apartments with sizes from 18.68 m² to 29.53 m². All apartments are equipped with cooking facilities.

After Berlin, the Free and Hanseatic City of Hamburg is the second largest city in Germany.
Hamburg has a population of approx. 2.7 million and is the centre of the Hamburg metropolitan region with over five million inhabitants.
In addition, the city – conveniently located between the North and Baltic Sea – has become a central goods hub between Northern Europe, Asia, North and South America and Africa.
The Hanseatic city also has an international airport and is one of the most important logistics locations in Europe. Moreover, Hamburg is important economically and also when it comes to science, particularly in the fields of aviation and space technology, biosciences and information technology and the consumer goods industry. The city is also significant for its media landscape and cultural and creative businesses. 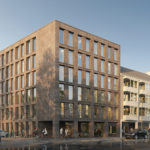 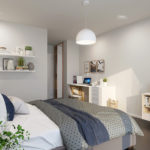